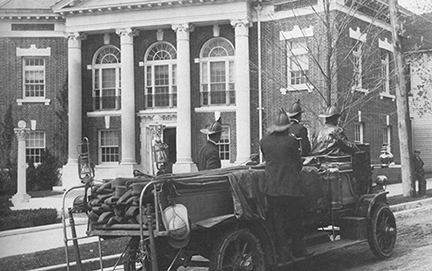 The old Town Hall, dating back to 1910, is one of several civic center pieces in Huntington which has fallen into disrepair. Throughout the years, the question of what should be done with this property has lingered. The answer came in the form of a 24 million dollar, 80 room hotel project which is expected to yield at least 100 construction jobs and 14 permanent jobs for Long Islanders.

According to Vision Long Island’s Director, Eric Alexander, “This property will get transformed into a destination, into really a need. With 70 restaurants, theaters, all kinds of activities and retail, there is not a hotel here, well now there will be and we are excited about that today.”

Huntington Township Chamber of Commerce Chairwoman, Vita Scaturro, was present during the award ceremony to speak to the significance of this project. “Along with creating economic development, this project will create jobs, improve our downtown and make our town even more beautiful than it already is,” Ms. Scaturro stated.

Born and raised in Huntington, George Tsunis has a vision for the hotel that will far exceed expectations. Mr. Tsunis cares about the community and in a way, this hotel is a philanthropic venture that will increase tourism and boost our local economy when finished.

Accepting the award, Mr. Tsunis said, “It was once said it takes a village and there is no village on Long Island like Huntington.” Calling himself a Huntingtonian, Mr. Tsunis stated that the Village has gotten the balance between intelligent development, conservation, and vibrancy right. Discussing the hotel project, he labelled it the most adept, historic, re-adaptation in all of Huntington. The building will have new life. Mr. Tsunis thanked the Huntington Town Board, especially Supervisor Lupinacci for giving his team the opportunity to give this property new adaptive reuse. Noting that the town was uncompromising on the point that the project must be stunningly beautiful, Mr. Tsunis thanked the Town for holding his feet to the fire to see that the project be done the right way.

“We are going to have what I think will be the most beautiful hotel in all of Long Island,” Mr. Tsunis concluded. Construction will start shortly and it is hoped that the hotel will open sometime next year.

You can watch the full video below: